I translated a science picture book, “Rocket Science for Babies” from Chris Ferrie‘s Baby University series, which sold more than a million copies worldwide in total. The Japanese version will be published today.

On top of translation, I had the honor of writing the preface and the commentary for the Japanese version, which are posted below:

It strikes me to see how children can easily understand what adults could not in the past. For example, I would often talk to my five-year-old daughter about how the Earth goes around the Sun or her great-great-great-countlessly-great-grandparents were apes. Merely a few hundred years ago, such concepts could hardly be understood even by some of the most educated adults at the time. In the 21st century, a five-year-old can ingest and internalize them as easily as breathing in oxygen.

In fact, humans have been getting smarter. It is known that the average IQ in many countries around the world has been constantly rising over the past century. This phenomenon is called the Flynn effect, named after the discoverer. The increase rate was so high that, if an average child time-traveled to 100 years ago, he or she would be a top 2% prodigy. While there are a number of hypotheses on the cause of the Flynn effect, most researchers agree that it is likely environmental. Education must have played a major role. Another possible factor would be science books for children like this one, which offer excellent opportunities to get familiarized with logical thinking from an early age.

Today, the vast majority of people accept Copernican heliocentrism and Darwinian evolution. However, humans still remain somewhat vulnerable to superstitions, some of which are harmful. Anti-vaccine conspiracy is a major social issue amid the ongoing COVID pandemic; in the US, many conservative politicians dismiss global climate change despite the mounting evidence; in Japan, fraudulent businesses under the disguise of “alternative medicine” remain unregulated, which provides unscientific and often superstitious or even spiritual “cures” to patients with fatal diseases such as cancer. Moreover, such rootless hoaxes, conspiracies, and pseudo-science are quickly spread like infectious viruses through SNS and irresponsible media.

Nevertheless, I am optimistic and hopeful. Why? Because today’s children, who are more familiar with scientific reasoning, will soon grow up and take over this civilization from us. As science literacy will continue to improve, today’s unscientific conspiracies will be turned into displays in history museums, just like geocentricism.

Our kids will be wiser than us. And tomorrow will be even better than today.

Like many other technologies, airplanes and rockets were created out of children’s dreams. The Wright brothers got their passion for flying from a toy helicopter that their father gave them in childhood. Robert Goddard, who is known as one of the fathers of rocketry, was absorbed by SF novels in childhood and dreamed of creating a “device” to go up to Mars.

This book elegantly explains the physics behind their inventions for producing lift and thrust. True, there are omissions such as Bernoulli’s principle, but this is not a textbook. It may not be complete but it is accurate. And most importantly, it provides an opportunity for parents and children to intuitively learn scientific concepts with fun.

When I translated this book from English, I took the advantage of the unique features of the Japanese language to make it even more enjoyable for Japanese kids. Specifically, Japanese has a rich and highly expressive set of onomatopeia, or words derived from phonetic imitations (such as “bang,” “boom,” and “swoosh” in English). The vocabulary is so extensive that there are onomatopoeic words for emotional expressions and even abstract concepts such as growth, abundance, and intimacy. They even appear in formal government documents. And of course, children’s books are full of them because they are amusing and intuitive. For years, Japanese children’s book authors have explored the expressive potential of onomatopeia and produced masterpieces such as “Moko Mokomoko” by a famous poet Shuntaro Tanigawa (in which the story is told solely by onomatopeia) and more recently “Darumasan ga” by Hiroshi Kagakui, which was my daughter’s favorite when she was one year old. I applied this linguistic magic to the Japanese translation of this book by adding onomatopoeic expressions that were not in the original text. It was because I firmly believe that the most effective way of learning science (and perhaps anything else) is to have fun. When you read this book for your child, please read aloud and enjoy the sound of the words, together with the scientific content.

The reason Goddard is known as a father of rocketry is that he was one of the first to discover the principle of space flight explained in this book.  Was he admired by his contemporaries for his great discovery? Unfortunately, it was the opposite. In 1920, the New York Times wrote:

“That professor Goddard, with his ‘chair’ in Clark College and the countenancing of the Smithsonian Institution, does not know the relation of action to reaction, and of the need to have something better than a vacuum against which to react — to say that would be absurd. Of course he only seems to lack the knowledge ladled out daily in high schools.”

Of course, we now know that it was the newspaper, not Goddard, who was wrong. As this book beautifully explains, “[i]f the fuel goes out, the ship goes forward.” It is exactly the relation of action to reaction, or Newton’s third law, which enables a rocket to move forward in a vacuum. I’m sure your children can easily digest it even though adults 100 years ago could not.

Despite the skepticisms, Goddard firmly believed in his childhood dream and never gave up his research, which resulted in the world’s first liquid propellant rocket. Although his rocket could not reach space, it became the foundation of modern rocketry. (More details on this story is found in my book, 『宇宙の話をしよう』(The Tales of Cosmic Voyage). ) 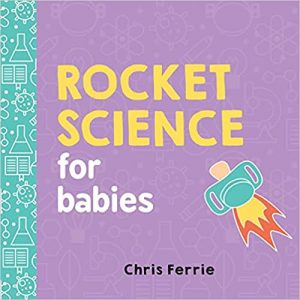 Books from the Baby University series include quantum physics, relativity robotics, and more.