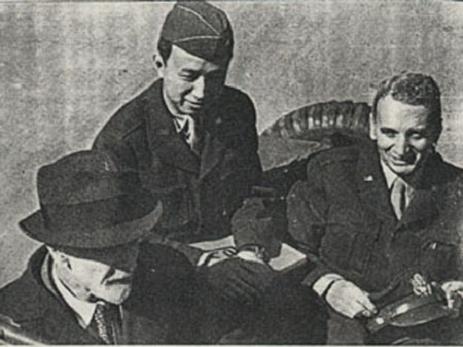 I immigrated from Japan to the US to work for NASA and make my childhood dream come true.

I don’t think I need to remind the readers that the two countries I love fought the most destructive war in the human history some seventy years ago, which claimed millions of lives.

The American view of Japan during WWII would not be very different from the current American view of ISIS, and that was not baseless. Schools taught kids, based on a naïve interpretation of the Japanese mythology, that the Emperor was a deity, while the Americans and Brits were “devils and beasts.” The government forced young soldiers to conduct suicide attacks. The Japanese military killed countless civilians, most notably and notoriously in Nanjing, China. And, of course, Pearl Harbor.

The American view of Japanese Americans during WWII would not be very different either from the current American view of Muslim Americans. Or, perhaps even worse. For example, 14,000 Japanese American soldiers in the 442nd Infantry Regiment, including former US Senator Dan Inouye, fought bravely and loyally and earned 9,486 Purple Hearts, while many of their parents were among ~110,000 US citizens of Japanese ancestry who were relocated to internment camps because they were thought to be “dangerous.”

Let me tell a bit of war stories of my grandparents. Both of my grandfathers were drafted – almost all healthy young men were drafted during the war, and of course, there was no such thing as conscientious objection. My paternal grandfather was a railroad engineer. He was sent to Burma to build railroads for the Army. My maternal grandfather was drafted when he was a student of Kobe University. He also served for the Army, and was assigned to a cargo ship on the Yangtze River in China. His best college friend happened to be in the same unit, and the friend had a beautiful sister. One day, on the ship, my grandfather told his friend that, if he could go back to Japan in one piece, he wants to marry her. The friend said “sure.” Later, my grandmother happily complained that her brother made the deal without her consent.

Meanwhile, without any hint of the secret deal on the ship, my grandmother was in Kobe with her sick mother. She lost her home just a few weeks before the end of the war due to the US air raid targeted the residential areas of the city. My paternal mother evacuated from Kanazawa and moved to Odawara with her little daughter (i.e., my father’s elder sister). It was common for the residents of major cities to relocate to rural areas in order to avoid air raids.

At that time, none of my grandparents could have had a slightest thought that their grandson would immigrate to the US, make friends with “devils and beasts,” and proudly work for the American space program. (Well, first of all, they would not have imagined at all that, just in a few decades, the mankind would use their best technologies not just for mutual destruction but for the construction of ships to travel to other worlds.)

And here I am. NASA Jet Propulsion Laboratory or JPL has been my dream place since I was six, when I witnessed the exploration of Neptune by the Voyager spacecraft through TV. At JPL I am very fortunate for having talented colleagues who I respect a lot. I am even more fortunate for having very good friends. I am proud of what I am doing – I am building the autonomous driving algorithm for NASA’s next Mars rover, which will fly to the red planet in 2020. I feel I am accepted by America. And I cannot thank America more for giving my childhood dream a chance.

Maybe the grandfather of the Burmese American colleague whose office is across the hall from mine could be used as a slave labor by the Japanese Army to build the railroad, which my grandfather was involved. By a rare chance, the grandfather of one of my friends could be the pilot of the airplane that dropped a bomb on my grandmother’s home. It is an amazing miracle that, 70 years later, we build a Mars rover together and drink beer together. I am truly thankful to the miracle.

NASA’s JPL, the institute that created the first US satellite, Explorer 1, and the only institute in the world that has successfully sent spacecraft to all the eight planets in the Solar System, is like the Pequod in Moby-Dick. You can find pretty much any ethnicity among its ~5,000 best and brightest crews. The charismatic former Director of the Laboratory, Dr. Charles Elachi, was born in Lebanon. My boss was born in Romania. Among the ten members of my group, only two were born in the US. Besides my boss, two, including myself, are from Japan, two from Italy, one from Germany, one from Iran, and one from Turkey. Listing the country of birth of my colleagues is almost like listing all the countries on the planet – Austria, Australia, Brazil, Canada, China, Columbia, Egypt, France, Guatemala, India, Israel, Korea, Mexico, Norway, Philippine, Russia, Spain, Taiwan, UK, Zimbabwe, and so on. You can hear any accent. You can find any religion. You can find any color of skin, hair, and eyes. JPL is the embodiment of MLK’s dream where men and women are not “judged by the color of their skin but by the content of their character.” That is exactly why JPL has been so successful.

Looking back the history, among the founders of JPL are the first Lab Director Dr. Theodore von Karman from Hungary and Dr. Xuesen Qian from China. The third Director Louis Dunn was from South Africa and the fourth Director Bill Pickering was from New Zealand. Perhaps I should note the very unfortunate fate of Dr. Qian. Despite his enormous contributions to early American rocketry, he was accused of having communist sympathies, and detained at a remote island in 1950. After five years of virtual home arrest, he was eventually sent back to China, where he became the “father of Chinese rocketry” – and missile.

However, despite such unfortunate mistakes, America has benefited significantly from incoming talents overall. In 1930s, the US accepted ~21,000 Jewish refugees from Nazi Germany despite the public opposition due to the grave economic state and antisemitism. Among the flood of refugees was Dr. Albert Einstein.  Abdulfattah “John” Jandali, who immigrated from Syria to the US in 1950s, became the biological father of Steve Jobs, the legendary founder of Apple, which now employs 115,000 people and earns ~$200B a year worldwide. Jandali himself also became a successful entrepreneur. And Dr. Wernher von Braun, a former member of the Nazi Party and SS who led the development of the V-2 missile, immigrated to the US after WWII, became the first Director of NASA’s Marshall Space Flight Center, and led the development of the Saturn V rocket that sent twelve American astronauts to the Moon.

I think the greatest strength of America has been, and will be, its ability to attract the brightest minds from the entire planet and combine their strengths. And that strength stems from America’s old tradition of generously giving dreams a chance, not only for those who are already in America but also for those who are eager to come to the land of opportunity.

Unfortunately, there are still many dreams in this world that were not given a chance. Perhaps, amid the chaotic battle grounds in the Middle East, there are curious eyes gazing stars, enchanted by the wonder of the universe. Perhaps, inside the mind of the silent boy in Aleppo covered by blood and dust, there is a flaming passion for constructing the peaceful future for the entire humanity. Perhaps, in the refugee camps where tens of thousands of people are desperately waiting for the gate to open, there are future Albert Einstein, Steve Jobs, and Wernher von Braun. Perhaps, on a packed inflatable boat that sails across the ocean dangerously and helplessly, there are seedlings of ingenuity that did not have a chance to grow in their home countries.

I would humbly like to ask the American voters to give their dreams a chance.