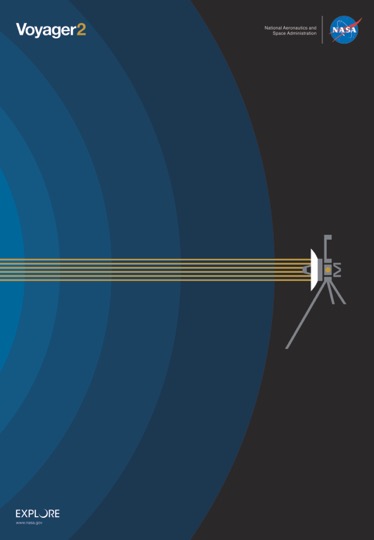 I think every NASA employee has a special spacecraft that inspired him or her in childhood. Apollo 11 is by far the most prominent source of inspiration among the old-timers. Many recent new employees chose NASA because of Mar rovers.

For me, it was Voyager 2. For that reason, I read the news on this Monday with a very special sentiment.

The Voyager sisters are five years older than me. Launched in 1977, Voyager 1 visited the Jovian and Saturnian systems while Voyager 2 completed the Grand Tour – meaning it visited all the gas giant planets of the Solar System: Jupiter, Saturn, Uranus, and Neptune. Both spacecrafts are still fully functional at the distance of 145 and 120 AU, respectively. Can you imagine a vehicle that works for 41 years non-stop with no mechanical maintenance at all? Of course, they are not free of troubles, such as the Plasma Spectrometer on Voyager 1 as I mentioned earlier and one of the two radio receivers on Voyager 2. However, they have no problem to keep flying, collecting and recording scientific data, sending them back to the Earth, and wowing us.

That was the news. But the news meant something more than that to me. Voyager is certainly more than an engineering marvel and a scientific revolutionary. She is even more than the source of inspiration.

Voyager 2 is my hero.

I was a 6-year-old boy in Tokyo when Voyager 2 encountered Neptune in 1989. With my space-geek father, I literary spent the whole summer in front of TV so that we wouldn’t miss any news from Voyager 2. I vividly remember the transformational moment when a blurry dot quickly became a full-fledged world, a beautiful blue world, on Voyager 2’s camera as she swiftly moved close to Neptune. When the TV said Neptune is “4 light-hour away”, my father, who was an optical engineer, did a quick back-of-the-envelope calculation and told me that if Earth is the size of a blue marble, Neptune would be still 5 km (3 miles) away from us. “Wow!” I thought. How can a spacecraft possibly navigate through the vastness and precisely fly to such a distant target?

I was too young to fully understand the scientific implication of her great discoveries such as the supersonic storm in Neptunian atmosphere and the icy geysers on Triton. However, the astonishing beauty of the blue planet alone was sufficient to deeply influence the future of the 6 year old.

Since then, my dream has been to build a spacecraft like Voyager.

24 years later, I immigrated to the US and proudly joined NASA Jet Propulsion Laboratory, the birthplace of the Voyager sisters. (Coincidentally, that was the year when it was announced that Voyager 1 entered the interstellar space.) I am now working on the Mars 2020 Rover and Europa Lander missions as well as on research of artificial intelligence for future spacecrafts.

It was Voyager 2 who showed me the way. She inspired me in childhood. She kept me motivated during hard times. And she is still far, far ahead of me.

She is leaving the heliosphere. I am still on the Earth, and none of my algorithms have flown to the space. I have not inspired any kids with my technical work yet.

In JPL’s “Dark Room” there is a monitor displaying the list of spacecrafts being operated by the Deep Space Network, which are sorted by the time since the launch. Voyager 2 is at the top of the list. (She was launched 15 days earlier than Voyager 1.) When I visited the Dark Room earlier today, it read: “T+ 41 yrs 114 days 5 hrs 23 mins.” (Photo credit: Masahiro Ono)

One thought on “Dear Voyager 2: Von Voyage, I will follow you soon.”