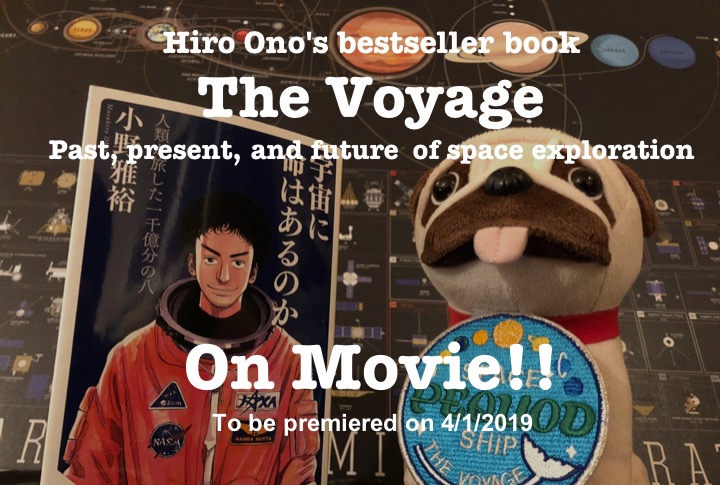 It is quite a pain when you have something you are eager to tell but need to keep quiet. Finally, it became public!!

My book, “The Voyage: past, present, and future of space exploration” (original title: 宇宙に命はあるのか：人類が旅した一千億分の八) will become a movie!

The book was published in Japan in this February and quite well received. 40K copies printed. Ranked the 3rd nationwide on Amazon.co.jp. An employee of a movie production firm spontaneously picked up my book, liked it, and made an unofficial offer about a month ago. Since then, it has been like a roller coaster ride. And today, finally, it became official!

The book is a saga of space exploration. Starting from Jules Verne’s inspiring imagination of space travel, it tells stories about how mankind made it real. The story involves Tsiolkovsky, Goddard, Orberth, von Braun, and Korolev, followed by less known engineers on Apollo such as Margaret Hamilton and John Houbolt. It tells scientific discoveries as well as human dramas behind the celebrated Mariner and Voyager missions and ongoing endeavor of the search for exterrestrial life, which I am taking a part of. The book concludes with the imagination of a distant future when the mankind joins the network of galactic civilizations.

While the book has not been translated to other languages, the movie will be premiered multilingually, including English!

The project has already hired several key staffs. The producer will be Yohei Sadoshima, a legendary manga editor and the CEO of a creator agency, Cork. The script will be co-written by myself and Hiroto Kawabata, a successful novelist and a science writer. Koki Nagano, who recieved PhD in computer graphics from USC and contributes to many Hollywood movies including Steven Spielberg’s latest movie Ready Player One, will direct the visual effect. Music is an essential part of the movie to convey the dream, passion, and imagination. The music director will be Yuko Usui, the vocalist of a Jazz trio Matricaria, joined by the other two members of the trio, Yuka Yanagihara (piano) and Megumi Otsuka (bass).

Of course, I will appear in the movie together with my 2 year-old daughter! My best friends and JPL colleagues, Tak Ishimatsu and Yu Takahashi, and Nat Guy, will make cameo appearances.

The movie will be released exactly a year from now – April 1st, 2019. Several small theaters in Tokyo, Osaka, Kobe, Kanazawa, and Fukuoka, were already booked for screening the movie, and more will come. US screening is TBD – our US marketing team is working hard!

More details are on our official press release. Happy April!