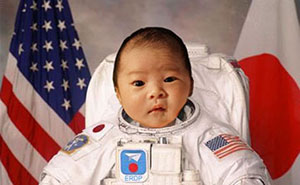 Today, on April 1, 2016, it was announced that my newborn daughter, Mi-chan, was selected as one of the first “babynauts” or infant astronauts, and will fly in space this November. Her mission will be a part of the Extraterrestrial Reproduction and Development Program (ERDP), which investigates if humans can be born and grow normally in microgravity. Misaki will spend three months in a space station with two other babynauts.

It was a tough competition. There were more than two thousand courageous babies who wanted to be the first infant in space. My daughter won the competition because they highly evaluated her physical strength (she did not cry at all when doctors drew her blood), her mental stability (she can sleep for five hours straight even though she is just a month old), and her intellectual curiosity (her wide-open eyes curiously observed the world right after her birth).

In the past 50 years, humans have accumulated the experiences of living in space for an extended duration. In the recent “A Year In Space” mission, American astronaut Scott Kelly and Russian cosmonaut Mikhail Kornienko stayed in the International Space Station for 342 consecutive days and came back to the Earth in the last month. It would be valid to say that humans have already acquired a matured technology to live in space.

However, humans have no experiences yet in growing up in space, simply because all the men and women who have flown to space were adults. However, if we do not want to end up with just being space travelers, and if we want to immigrate to space one day, we must acquire the technologies to reproduce and develop outside of the Earth. Whether human civilization can extend itself beyond our home planet or not is on the shoulder of one-month old Misaki.

One of the greatest challenges for infant space flight is diaper changing. If you change a diaper full of poops in zero-gravity, what would happen? Well, I won’t describe it since some of you may be reading this article during lunch, but you can imagine. In order to overcome the challenge, this mission will be performed in a close collaboration with Japan, arguably the most advanced country in toilet technologies. More specifically, what called a “smart diaper,” which was recently invented by Dr. Kiyoshi Mitarai and his team, will be tested in space for the first time. A smart diaper sucks urine and feces immediately, compresses them, and safely stores them in a disposable backpack tank. It is also equipped with a small robotic arm inside the diaper, which wipes baby’s butt immediately. According to Dr. Mitarai, this revolutionally technology will allow babies to enjoy a fresh and clean diaper all the time in any environments: on the Earth, in space, or on other planets.

Misaki will have to go through a tough training. It will also be tough for me to be separated from my loving daughter for three months. I must admit that my wife and I are anxious about Misaki traveling far away in space. However, we have a belief in her. We know Misaki is a strong girl. We believe she will complete the mission, come back home safely, make a great contribution to the humanity, and make her parents proud.